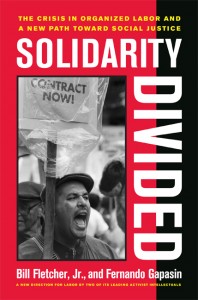 11 thoughts on “Solidarity Divided: The crisis in organized labor and a new path toward social justice”